“Glories of the Hermitage” Russia in the Winter

During the Gilded Age, at the turn of the last century, St. Petersburg was a must stop on every social calendar…in winter.  The social season of Russia’s imperial capital was at it’s height during January and February, when there was little sunlight.

Having spent a week in St. Petersburg, in the dead of winter, I have experienced the history of this city in a way few tourists are able.  Five hours of daylight, constant snow flurries against the backdrop of pastel  mansions and very few tourists, transported me to the past 300 years of winters in Peter’s City.

This program has been designed by Karine Hagen, daughter of Viking’s owner Tor Hagen, who had lived and studied in St. Petersburg and has superb connections in Russia.  You have seen Karine in the wonderful videos that Viking produces which highlight the insider’s access and fascinating content that highlight all Viking cruises.  I was excited to visit the Hermitage when closed in the company of a top curator.  Hoping to recapture and learn about the Gilded Age of St. Petersburg, this itinerary did not disappoint.

I saw the fantastic art collections of the Hermitage–the most fantastic in the world in a closed museum–but the story behind the preservation of these collections and dedication of the curators and citizens was more interesting to me.

On our first drive to the Hermitage we passed the sign below, preserved since World War II.  It warns citizens surviving a brutal 872 day siege of Leningrad, to walk on the other side of the street where the light was dim to avoid being an easy target for snipers. Flowers beneath this sign show the terrors of the siege are not forgotten.

Inside the Hermitage we saw many of the masterpieces collected by Catherine the Great and saved by the workers at the Hermitage who quickly cut most from their frames, rolled them up and shipped them out to protect them from the Nazis.  During the siege, citizens came to the Winter Palace or Hermitage to take surreal tours of the empty frames.  During these, the curators would describe each picture that would have been in the frame in detail.  Today, many of the pieces do not have their original frames as some of these had to be burned for firewood during grueling winters with no heat. Each time you saw of frame not quite of the period, you imagined a Rembrandt or Da Vinci being cut out, rolled up and put on a train to Siberia.

We also saw the newly opened storage rooms of the Hermitage.  It is an offsite, state of the art facility where you walk among the treasures of the Romanovs.  Twice saved, during the revolutions of the early 20th century that overthrew Tsar Nicolas II and again during the Nazi siege, these treasures tell a history of daily life. The dining tables of Peter the Great and Nicolas II, court dresses of Empress Elizabeth I, royal carriages and countless other treasures collected and used by the Romanovs.  I couldn’t help but feel I was taking a similar “empty frames” tour of the lives of the Romanovs.  A very early telegraph used by Nicolas II sat beside an easy chair.  Had Nicolas sat by this machine and received reports from the front lines of WWI? The easy chair was worn in a way that showed where his boots had rubbed the footrest.

Similarly, many of the masterpieces of the magnificently reconstructed Catherine Palace in Pushkin, formerly Tsarskoye Selo, were saved by curators who had only days to pack it up following the Nazi invasion of Russia.  The newly reconstructed Amber Room, could not be removed in time and though covered up was discovered and shipped away by the Nazis, leaving its whereabouts as one of the great mysteries of the war. We walked through the rooms refurbished to appear as they had during the height and excesses of the Imperial days.  Surreal again, lit by the bright winter light of a snowy day.  I waited for Catherine the Great to glide by.

The Tsar’s box remains at the Old Mariinsky Theater and Tchaikovsky’s Swan Lake is often performed as it was when it premiered in 1895 at the same theater.  You are never far from the past and Russian passion for the arts is unlike that found anywhere else in the world. Both the new and old Mariinsky are filled every night by citizens from all economic strata.

We toured the Yusupov Palace.  One of 54 owned by the wealthiest family of the late 19th century and famed as the murder site of Rasputin in an unsuccessful attempt to help the royal family avoid revolution. Walking among the gruesome ghosts of this incident, complete with the gramophone that Felix Yusupov played  records to pretend a party was occurring upstairs,  was again transporting.

Finally, we were very fortunate that Viking Cruises could arrange a preopening  visit to the magnificent new Faberge Museum in the restored Shuvalov Palace. Much of this collection was recently purchased by Russian entrepreneur Viktor Vekselberg from the famous Forbes collection, including nine of the famous Imperial Eggs, now returned “home.” The mansion rivals the Faberge masterpieces in grandeur and breathtaking beauty.   The Hermitage is salivating over this collection but for now, it is a private museum and collection. 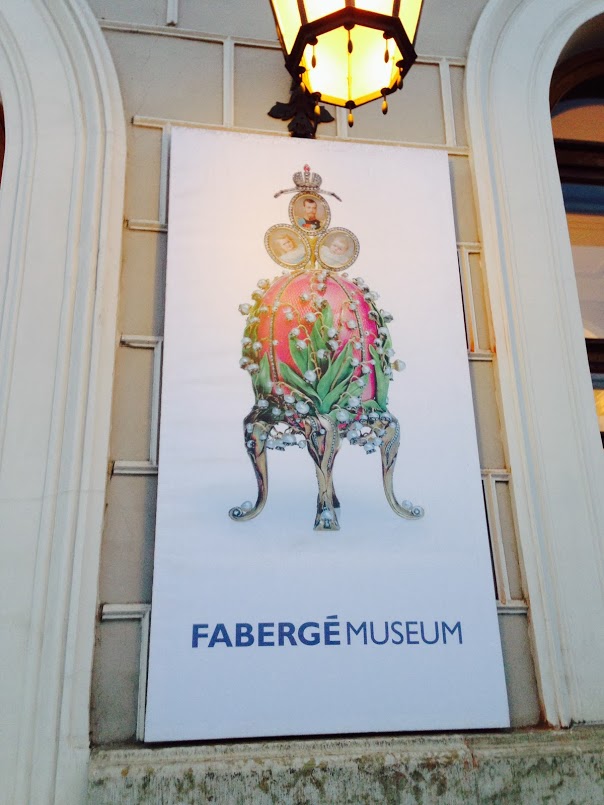 As we walked among the ghosts of the past, talk of the present was never far from anyone’s minds.

The visions we were allowed of a very turbulent past (and I haven’t even mentioned the almost overnight, economic earthquake that occurred with the fall of the Soviet Union) do not lead to simple conclusions of the future, but do demonstrate a population of unusual determination.  Winston Churchill concluded that, “Russia is a riddle wrapped in a mystery inside an enigma.”    Russia may be again at a turning point but lessons of history may help unwrap the mystery inside the enigma  or not.

I was fortunate to have a glimpse through that window rarely afforded tourists. An extraordinary glimpse into the past and present.

3 thoughts on ““Glories of the Hermitage” Russia in the Winter”